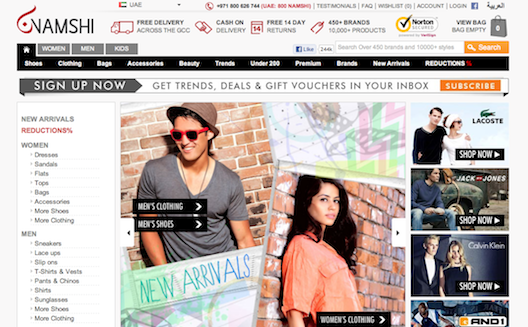 Christmas is coming early this year to several of Rocket Internet's clones. The latest in a slew of investments by J.P. Morgan, Namshi, the Dubai-based Zappos clone, has announced a US $20 million round of funding from both J.P. Morgan and Blakeney Management.

Over the past month, J.P. Morgan, which has over $1.3 trillion in assets under management, has been confirming its broad support for the German-based e-commerce factory, first investing an undisclosed amount in Rocket's European Zappos clone Zalando on August 16th, then sprinkling $45 million on Brazilian Zappos-style site Dafiti in late August, $40-80 million on Russian Zappos clone Lamoda, and "hundreds of millions" on Asian Amazon clone Lazada, both in early September. In the past few days, it has also announced "tens of millions" in investment in South African Zappos clone Zando and "double-digit millions" in Asian clone Zalora.

The New York-based investment house seems to be betting large on shoes- and Rocket Internet's ability to crack emerging markets, clearly having secured a broader deal with the Samwer Brothers, the terms of which have not been disclosed. Rocket is also now making a big push in Southeast Asia, a move that may be bolstered by J.P. Morgan's support.

Namshi, which launched in late 2011, sells over 400 brands of shoes and accessories, operating throughout the Gulf. The company, which is led by Muhammed Mekki (who spoke to Wamda this year about educating the market), Louis Lebbos, Hosam Arab, and Faraz Khalid, now plans to solidify its presence in the Saudi market.

"Namshi will be expanding logistically across the GCC, specifically in Saudi Arabia. The investment will allow us to experiment and explore a more diversified product portfolio, and invest more in the customer experience and in the channels we use to reach new customers," Lebbos told Wamda.

The investment appears to be the first by London-based Blakeney Management. The appeal of these investments, Mekki told Reuters, is that "it's a proven business model in most other developed markets and the investment signals international investors see immense scope for the business in the region."

Perhaps the round of funding will also help Namshi escape the fate of fellow Dubai-based clone Mizado, which closed last month as Rocket chose to ramp up Amazon clone Jumia in North Africa instead. Many speculated that Mizado's closure was due to narrow margins and perhaps a strategic refocusing driven by the terms of J.P. Morgan's deal. Either way, growth in the lucrative Saudi market seems necessarily for Namshi find the scale it will need to succeed.

Will they look to the example of MarkaVIP's in-house delivery service to streamline service in the notoriously tough but rewarding Kingdom? Maybe; Rocket is known for sticking to in-house, top-down policies rather than external cues, but it's a good bet they'll bring logistics further in-house to improve their flexibility and control.