You've heard it before: unemployment is a major issue in the Middle East. New Gallup data reveals that, unfortunately, things haven't gotten better, but the opportunity is ripe for a shift.

These low employment rates reflect that half of the Middle East’s population (56%) does not participate in the workforce, either voluntarily or due to the inability to find a suitable job. That's largely due to the low number of women in the labor force (although increasing unemployment among the region’s women is sometimes a positive sign, because more women are entering the total workforce, that's mostly the exception to the rule). 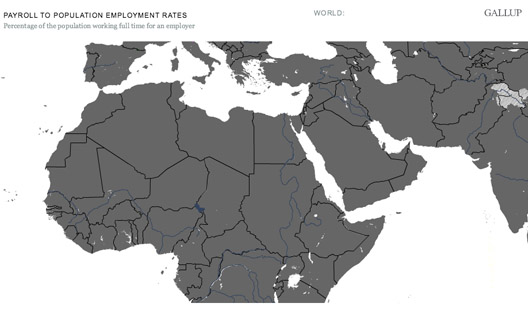 What stands out in this report, however, is that 10% of those with jobs are self-employed, a much higher percentage than in EU countries or North America. In this tough job climate, it seems, job-seekers are finding their own solutions.

Most of this population aren't what one might think of as an entrepreneur looking to scale; the majority of the self-employed have founded one-person companies, or are freelance craftsmen working as part of parallel informal economies. Therefore, self-employment in the region does not necessarily create the economic impact that it does in Europe and Northern America.

These findings serve as (further) evidence that the Middle East needs entrepreneurs and small businesses that can successfully scale to reinforce an economy lacking in big companies and institutions. To build their economies, governments in the region should adopt educational and economic systems that promote entrepreneurship, and helping to encourage underemployed young people and craftsmen to establish startups that can systematically contribute to the region’s economy.

Of course, entrepreneurship alone isn't a solution. Fortunately, several startups in the Arab world, such as Nabbesh, Glowork, and others, are addressing the unemployment issue directly, by helping job seekers find the right jobs. It will take a generation to shift the current status quo, but policies are changing, along with opportunities. If it hopes to tackle unemployment, the region will have to continue to encourage trends like an Indian company outsourcing to women in Saudi Arabia.