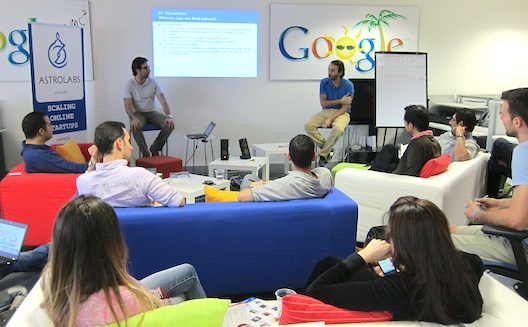 “We were originally thinking about how to fill the gap in the regional [entrepreneurial] ecosystem,” says Lebbos. The idea is to create “super concrete actionable modules” involving their content partners Google, PayPal, and Qualcomm, that “guide entrepreneurs in fields like conversions, marketing, funding, team building and others.”

While at Namshi, Lebbos and Mekki often mentioned their dedication to training their own staff and educating the ecosystem, this past weekend, they put the model into effect for the first time, launching a three-day workshop, supported by Google for Entepreneurs, on “Scaling Online Startups” (SOS).

More than 20 leading entrepreneurs gathered at the Google campus in Dubai each day to tackle day-to-day issues in interactive discussions about customer and investor relations, marketing investments, operations, conversions optimization, and effective social media approaches, as they lounged on colorful couches.

With mentors including Mohammad Gawdat of Google, Ihsan Jawad of Zawya, Elias Ghanem of Paypal, and Christopher M. Schroeder, a U.S.-based venture investor and member of Wamda’s Board, who joined via Google Hangout, attending startups received a full dose of advice. "I'm going away with a crazy to-do list," said Shant Oknayan, one of the participants and founder of Glambox, a start-up that gives women a chance to try, learn and buy the latest in beauty products.

To make the event closeknit, SOS focused on organically recruiting participants with established online startups at similar phases, which, along with Glambox, included Qordoba, Nabbesh, Souqalmal, Restronaut, Duplays, Allinque, Ananasa, Careem, TheLuxuryCloset.com, hotandshady.com, and noviplus.ae. “Some of those whom we wanted to recruit as speakers actually were more interested in being participants after we explained the idea to them,” Lebbos said.

In Google’s cozy environment that weekend, participants opened up candidly with each other, sharing the highs and lows of their experience and the knowledge they gained throughout their start-ups journeys.

“It has been truly useful for us. The last memorable thing we’ve been to was Celebration of Entrepreneurship, which was multiple times the budget of this,” says Ravi Bhusari, co-founder of Duplays, a startup connecting players to casual sports games, to make communities healthier, more social and more connected. “Since then, none of the workshops we’ve attended have been as effective in terms of learning as SOS was.”

Entrepreneurs are doing a lot of things right, yet it the things that go wrong can be quite simple, says Ghazwan Hamdan from Restronaut, a new startup that gathers like-minded people over dinners. Those pitfalls are what he found SOS addressing professionally.

The details are what helped the most, said Kunal Kapoor of TheLuxuryCloset.com. “I’m thankful to everyone who shared the small details; it makes me more confident. I really want to go and scale!”

Elias Ghanem, the General Manager of PayPal in the Middle East and North Africa, was also impressed by the honest exchanges that took place during the workshop. “What the participants done the last two days was share and share,” he says. “If each one of us shared 10 things that need to be done to launch a startup in their field, imagine the outcome.”

For Schroeder, who just wrote Startup Rising, the first book on startups in the Arab world, the enthusiasm was palpable. "You could feel the energy come through Google Talk," he said. "Entrepreneurs and ecosystem builders not only asked good questions, but as often they answered each other. I learned as much listening to them as anything I had to say."

The community hopes to continue the momentum; all of the participants showed interest in regrouping in a couple of month to measure their progress on specific to-dos. On the spot, the Astrolabs team set a plan to hold regular follow-up sessions and go deeper into specific topics, says Lebbos. Next up, they’ll be bringing the platform to Beirut, Cairo, Riyadh.