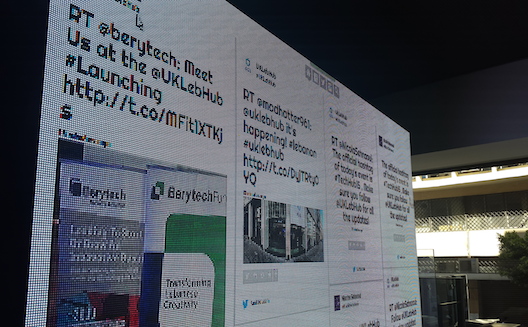 Standing on a podium in a carpark in a fast sweltering Beirut, the UK’s Ambassador to Lebanon, Tom Fletcher, announced that he had forgotten his speech and could someone bring it to him. Sure enough, in the spirit of the event he was attending, a drone (designed and manufactured in Lebanon) came flying to drop off his words.

Launched today at its new premises in the Beirut Digital District, the latest initiative from Lebanon’s Circular 331, the UK Lebanon Tech Hub opened its doors. The UK government and Lebanese Central Bank (Banque du Liban, BDL) partnership will act as an accelerator and mentoring hub for Lebanese startups in the fields of knowledge economy, ICT and creative designs.

Originally announced at the BDL Accelerator Conference in November 2014 the Tech Hub is said to be the result of many conversations between the British Ambassador Tom Fletcher and Riad Salameh, Governor of the Lebanese Central Bank.

Under the umbrella of Circular 331, the BDL’s $400 million equity fund for startups, and the UK’s Trade and Investment department, the new accelerator is set to help Lebanese startups launch themselves onto a global platform during a six month stint in London. 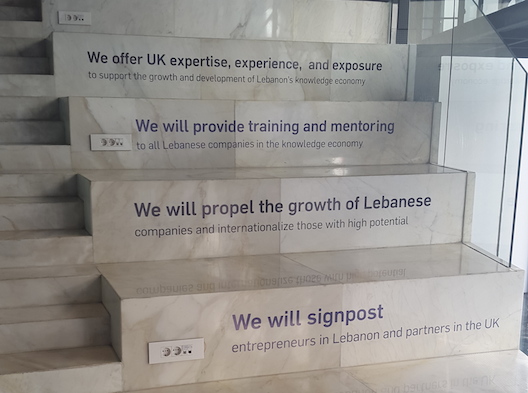 Never were steps so informative.

Not exclusive to businesses just starting out, the Tech Hub doors are now open for applicants at all stages of their business. Participants will be chosen by a yet-to-be-established committee of Lebanese and British ecosystem experts.

Come June the committee will announce its first selection of 45 teams who will then be mentored on how to develop their business plans; of these, 30 will be selected to receive a detailed diagnostic of why they were chosen, get feedback on how they might progress to the next stage in their business, and where they might find a good market fit. Finally, of that 30, 2 to 15 will graduate to the final stage, earning the opportunity to spend six months in the UK.

While in the UK, the members of each company will be able to conduct product testing, access value chains, meet people who provide complementary products and services, and meet similar startups. As an accelerator they will provide funding for the startups to get them off the ground, but will not invest for equity.

And once they are finished in London? “The one condition is that these companies provide jobs in Lebanon,” says Country Director Nadim Zaazaa. Returning to Lebanon the companies will continue their work and hopefully provide jobs within the local economy.

Alongside the acceleration program the Tech Hub will offer a ‘capacity building program’ which will see them working with Lebanese entrepreneurs, investors and the supporting ecosystem, through business and tech-specific training; an ‘outreach program’ looking to address business and innovation needs; a ‘communications and marketing program’ working with entrepreneurs to market their products to an international audience; and lastly, a ‘signposting service’ where local tech companies will be given a platform from which to launch themselves onto the UK and international markets. 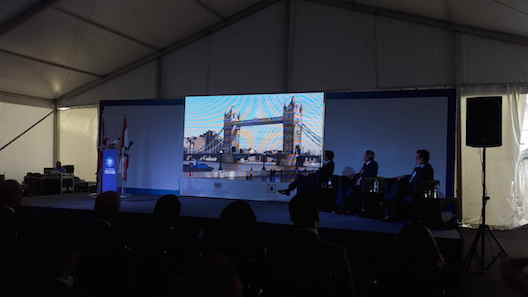 The UK, which enjoys an internet economy that rivals other European countries, and is considered to be the biggest in Europe, will be able to provide the startups with the resources and education that otherwise they might find very difficult to get in Lebanon.

“Being in London they will be exposed to an international stage,” says the Tech Hub’s International Accelerator Manager in the UK, Alessio Bortone. “It’s about breathing [in] the ecosystem.”

Entrepreneurs, with established companies, attending the launch were in two camps about whether or not they would themselves be applying to the Tech Hub. “We’re going to apply,” said Karl Atiyeh from Servmeco, a predictive data analysis software company with a focus on the restaurant industry. “But one of us would have to go to London and we don’t know if we can spare a team member for an extended period.”

But the awareness of a need for more supporting organizations within the sector is felt. “We [Lebanese entrepreneurs] need as much help as we can get,” said Karim Safieddine, cofounder and CEO of Cinemoz.com, an Arabic video on-demand platform. “The ecosystem has been struggling; it lacked something to tie the players together. Things like this and 331, you could see a shift to a proper industry.”