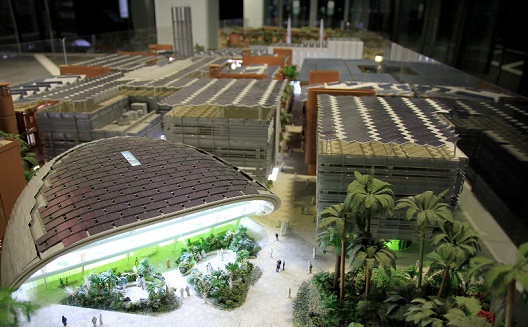 A Model City. A model of the experimental 'knowledge hub', Masdar City. (Image via EfficientDesign.de)

A few key challenges are still holding entrepreneurs back in the UAE, as the federal government makes startups a key plank in its Vision 2021 development plan.

Last week the UAE announced an $82 billion science and technology fund, designed to catapult the country into the ranks of internationally leading competitive knowledge economies, and the UAE National Charter 2021 seeks to turn the UAE into a global entrepreneurship hub.

Now, halfway through the decade that the UAE wants to end by being one of the best places in the world to do business, it’s time to take a closer look at how the startup ecosystem is growing and where the roadblocks are.

The UAE entrepreneurship ecosystem has grown tremendously during the last five years.

According to Wamda’s 2015 Country Insights, almost 60 percent of all entrepreneurship-enabling institutions in the UAE were created in the last four years, after the Vision 2021 plan was unveiled.

By regional standards, the UAE’s economic track record is impressive. It outperforms all other MENA countries in most global rankings and ranks among the top 30 countries worldwide in global competitiveness, entrepreneurship, global opportunity and prosperity. 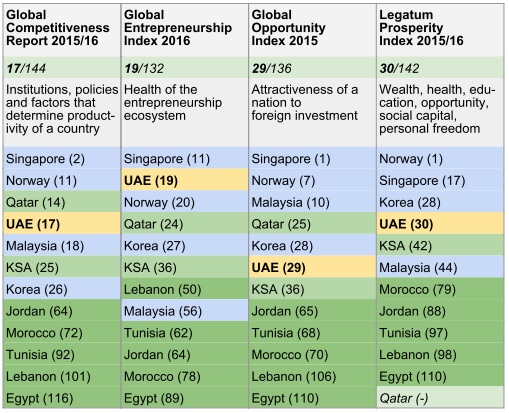 Rankings where the UAE scores in the top 30 countries globally. (Images via Jonas Feller)

The strength of the UAE ecosystem lies in the combined efforts of governmental, private and corporate players, which have been key to pushing the ecosystem in the right direction.

In 2009 the federal government redefined SMEs to enhance the effectiveness of supportive policies and increase bank lending.

The UAE's new definition of SMEs.

This was followed by the SME law in early 2014. Federal authorities must now allocate 10 percent of procurement budgets to SMEs, and for government-owned firms it’s 5 percent.

The performance of UAE-based SMEs has been improving ever since.

The SME100 initiative celebrates the best performing SMEs in Dubai with an annual award and individual support, with startups such as Souqalmal, Careem, Duplays and The Box honored by the initiative.

The UAE government is keen to develop emerging innovation clusters by facilitating linkages between universities, corporations and startups.

IBM and Mubadala, Abu Dhabi's prestigious development agency, joined forces in November 2015 to create Cognit, which brings the Watson supercomputer to the MENA region. It’ll enable companies to leverage big data technologies and is expected to spur on startups working in fields including data analytics and business intelligence.

The potential of the UAE ecosystem has convinced an increasing number of large corporations to partner with startups.

In 2013, Aramex, Google and PayPal supported ShopGo to offer entrepreneurs a competitive e-commerce service. A range of accelerators and incubators are backed by corporations such as STC, Mobily, MBC and DP world. Astrolabs has partnered with Google. And the Majid al-Futtaim conglomerate invested in Beam Wallet, while Emirates Telecom du signed a partnership with the startup.

In this environment a range of startups have already $100 million-plus valuations, among them Souq.com, Careem, Marka VIP, News Group and Namshi.

This, as well as the potential ecommerce opportunities, is convincing other startups to relocate to the UAE. Consulting firm Frost & Sullivan expects the GCC ecommerce market to be worth $41.5 billion in 2020, with 53 percent of this in the UAE. 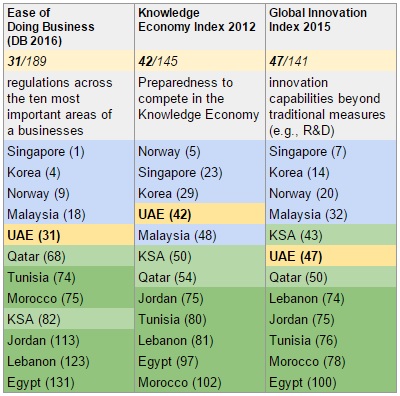 UAE ranks dead centre for the above indicators.

But if the UAE wants to achieve its vision of becoming a global startup hub and join the league of innovative nations such as Singapore, much more needs to be done.

The challenges of emiratization, R&D spending and economic integration are examples of conflicting goals and slow decision making processes that are holding entrepreneurship back.

In the short- to mid-term there is a conflict between international competitiveness and nurturing a national entrepreneurship community.

Emiratis make up around 12 percent of the population in the UAE and of the four million employees in the private sector, only 20,000 are Emiratis.

The 2021 vision, encompassing smart cities, renewable energy and even a space program, requires a huge workforce in the private sector. Almost 60,000 experienced extra engineers alone are needed between 2011 and 2020.

This volume of professionals can realistically not emerge out of the national workforce within the next five years.

If building a globally competitive startup hub is the top priority for the UAE, the ‘global talent war’ will require incentives for well-educated engineers, scientists and programmers to consider the Emirates not only for corporate jobs but also for jobs within startups, which can’t afford to offer the same perks and salaries.

Furthermore, on balance, engineers and programmers found most successful startups and their scarcity in the UAE endangers the country's vision of becoming a truly competitive startup hub.

In Chile the government offers foreigners $40,000 if they move there, and in Singapore the government introduced an EntrePass scheme that makes it easy for entrepreneurs to resettle.

The UAE has yet to decide if and how a similar procedure could be offered. It’s gone silent about an entrepreneurship visa vaguely announced in June 2014.

Similarly, difficulties around foreign ownership outside the UAE’s free zones could have a significant influence on the decision of global entrepreneurs to settle in the Emirates. A potential law that was brought up in March 2015 has yet to be discussed.

The UAE is leading the region in technology adoption but in terms of research and development as share of GDP, it’s currently ranked alongside low-spenders Mexico and Romania by the World Bank.

While OECD countries spent an average of 2.3 percent on R&D, the UAE spends 0.5 percent. The low R&D spend means it is not surprising that the patent rate is stuck at around 20 patents annually, compared to over 1,000 in Singapore and over 100,000 in South Korea.

Government accounts for 49 percent of R&D spending and universities 44 percent. Corporations only make up 7 percent of that, indicating that they do not perceive the UAE as a destination for R&D efforts.

To become a knowledge society, concerted efforts will be needed to convince corporations to become stakeholders and contribute with know-how and resources to universities and tech-companies.

Free zones need to be turned into knowledge clusters, The carbon-neutral free zone Masdar City in Abu Dhabi is a promising example, but it is too early to gauge its success as a link between universities and companies in the cleantech industry.

The concept of corporate startup collaboration is a strategy that could have a high impact in MENA, and an upcoming study by the Wamda Research Lab will shed more light on these. 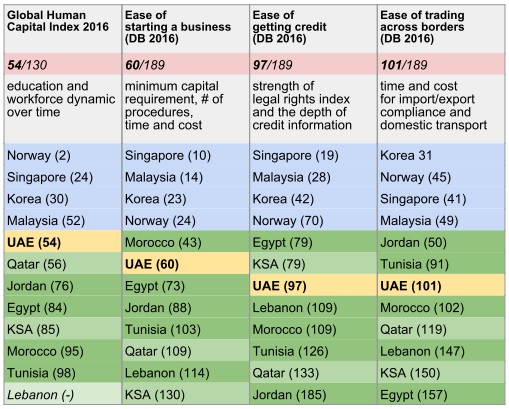 These are domains where the UAE needs to improve in order to boost economic activity.

Entrepreneurship does not happen in a vacuum and renewed efforts to remove trade barriers between GCC countries are vital.

Bahrain, Kuwait, Oman, Qatar, Saudi Arabia, and the UAE founded the Gulf Cooperation Council (GCC) in 1981 to foster greater political and economic cooperation, and in 2001 a common currency, the Khaleeji, was proposed but this is still a distant reality. However, in early 2015 the GCC Customs Union became a reality with a unified customs system and fees being levied only once on imported goods.

The UAE is home to less than 10 million people. The GCC countries together form a market of 50 million people. Since breaking the barriers to scale is vital for the success of entrepreneurship in MENA, every step that makes trade within GCC easier serves the interests of startups.

One in two entrepreneurs surveyed as part of an earlier Wamda Research Lab study cited expanding into neighbouring Arab countries a top challenge.

It’s clear that outperforming other MENA countries and becoming a global startup hub are two significantly different aims. The first has been achieved. To succeed with the second, bold decisions, faster implementation and strategic, long-term planning must take place.

The most pressing potential solution to a challenge faced by entrepreneurs is the missing bankruptcy law.

Under the current legislation, insolvent debtors may face prison sentences.

There have been rumors about a new law for years. In July 2015, the leading newspaper in the UAE announced a draft for a new bankruptcy law that finally got the approval of the cabinet. As of November 2015, the law still needs the approval of the Federal National Council, Supreme Council and the UAE president.

Should this law be passed soon, another hurdle to entrepreneurship in the UAE will be solved. On the other hand, if the pace of reforms slows down, the achievement of the National Vision becomes increasingly less likely.