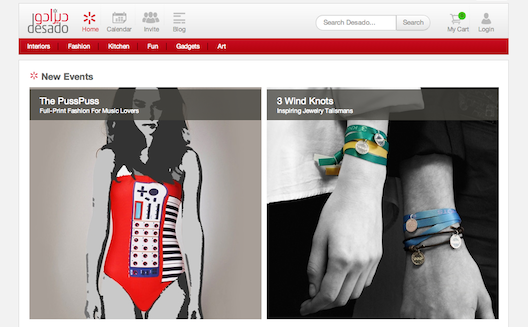 It’s been said that there needs to be more linguistic creativity when it comes to branding in the Arab world.

But don’t confuse either party with the other- rivalry between the two e-commerce sites has been running ever since both launched within days of one another last December.

(Disclosure: Wamda Capital shares investment and management resources with MENA Venture Investments. Neither were consulted for this article.)

Of course, no current e-commerce site will say that rivalry a bad thing in a new sector. "We don't feel any rivalry. On the contrary, I think it's good to have other concepts around as well because we benefit from each other," says Chbib. "We have actively reached out to Wysada to establish a rapport and exchange ideas."

Yet how the two are stacking up against each other will reveal what's working in the home goods sector. And when it comes to assessing what works, neither company is overly candid about its metrics.

In our brief chat last week, Wysada portrayed itself as steadily fulfilling demand. Customers are happy, Wysada's regional marketing manager said- 30% of its buyers are repeat customers, and 60% of its inventory are repurchases. The company is focusing on building its own brand, to serve a need it perceives in the market for larger furniture goods, while implementing tag sales (sales curated by famous tastemakers) to boost the popularity of its kitchen goods segment.

Desado, on the other hand, seems to be banking on the idea that it is focused on demand creation- serving customers things that they didn’t even know they wanted. "We are a discovery platform,” Chbib repeats. “You don't know what you want, and you come to Desado and you find things you've never thought of. 90% of what we do isn't branded. We’re trying to make people aware of design as a concept.”

The goal is aspirational- to educate the market not just about shopping online, but about appreciation of design. Yet Chbib has a point that demand creation (making customers desire something they didn’t know they needed) can be a much more powerful position to be in, and potentially more profitable, than demand fulfillment (catering to existing market needs).

But. It’s difficult to assess how well a company is succeeding at either, without data.

Desado was not forthcoming about customer satisfaction metrics, aside from revealing that for its repeat customers, the time between first and second orders has decreased from 30 days to 3 to 4 days. Wysada reports an average of 5 days between orders for repeat customers lately, but, without any information about the sample sizes, the two data points cannot be compared.

Of the 250 sales events Desado sees per month, around 85% of orders are fulfilled within a given month. 90% of orders are done via consignment. “We don’t purchase inventory at this stage,” Chbib describes. “It’s too dangerous, as we don’t have enough data to understand customer needs yet.” By the end of 2013, he says, the picture should come into focus.

This rule goes for most of the site’s statistics, he says; too early to discuss. The site is clearly experimenting with a range of verticals. “Designers change from month to month, as we’re trying out new things,” he says, and yet the company is sticking to certain percentages; 25-30% of its sales come from “quirky, fun items,” while only 10% comes from branded fashion. (Harir, which is experimenting with a mix of 50% global brands and 50% local designers, and also trying to up consumption of “quirky,” unique items, may be interested in these numbers).

Another aspect that Chbib insists is unique about Desado is its focus on data. “We’re a very data-driven company. The depth of where we go is the most unique thing. I can't claim that it's revolutionary, but I haven't seen anything like it in the Middle East,” he says. “We make educated decisions rather than rely on gut feelings.”

Again, it’s hard to assess the validity of a claim without access to details. Customizing the home page based on a viewer’s gender, segmenting newsletter delivery times based on the times that customers open their emails, and tailoring newsletters based on a customer’s preferred categories are the only examples offered.

Yet, whatever they're doing, Chbib insists, “I wish that more e-commerce companies were doing it our way, because then the sector would be more advanced."

In any case, Desado is staying focused, says Chbib, on the basics that make or break an e-commerce site: honing its supply chain, and offering variety to attract and retain customers; its new round of investment will help both goals. The company has already launched its own last mile logistics in the UAE and, like Namshi,  MarkaVIP, and Harir, hopes to launch a similar service in Saudi Arabia this year (its delivery serves the GCC).

It will also go mobile. “We’re looking heavily into it,” Chbib exudes. “Over 30% of our traffic is from mobile. It’s the future of our business.”